Skip to content
Parents are paying up to $100 an hour for tutors, driving up demand and worsening inequities

Parents are paying up to $100 an hour for tutors, driving up demand and worsening inequities 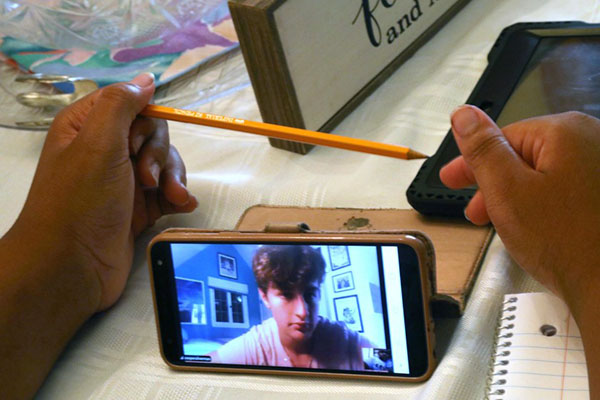 Malachi Morris-Jackson was struggling with distance learning, falling behind in reading and algebra, when he met high school senior Cooper Silverman. In weekly sessions figuring out equations and analyzing prose, the volunteer tutor works to uplift Malachi — telling him “you got this” and keeping the 11-year-old engaged by pulling off the occasional card trick.

Malachi is one of the legions of students in California who have come up against obstacles with virtual learning and are falling behind without the structure of the classroom. But he is also fortunate to have a high-demand commodity: a tutor, whose one-on-one work offers what experts say is among the top solutions to stem the learning losses of so many students.

“Far and away, the most effective tool we have to begin fixing this is tutoring,” said Robert Slavin, director of the Center for Research and Reform in Education at Johns Hopkins University. “Nothing else can be put in place as quickly with as high a likelihood of working.”

Coronavirus-forced school closures have fueled an unprecedented run on tutors that takes in the gamut of circumstances — including students who need academic help like Malachi and those seeking to maintain their high-achieving status. But for every parent who can pay for private tutoring, there are others who can’t, fueling a surge of start-up volunteer tutoring groups.

The demand is evident at pricey firms — which can charge $25 to more than $100 an hour. A+ Tutoring, a San Fernando Valley-based tutoring company, has seen a 70% jump in web traffic since March, company owner Roman Slavinsky said.

Yet this tutor-for-hire frenzy highlights concerns about how the pandemic could further widen the education divide.

“We are going to have an exacerbation of massive inequality,” said Prudence L. Carter, dean of UC Berkeley’s Graduate School of Education. “And many children from economically vulnerable backgrounds who need access to tutors will very likely not get that support.”

The Los Angeles Unified School District, where 80% of the 460,000 students are from low-income families, announced in August that it would attempt to address the need through a pilot tutoring program run by a nonprofit start-up, Step Up. So far, 500 students in kindergarten through eighth grade in South L.A., the Huntington Park area and the San Fernando Valley will be paired with volunteer tutors — many of whom are local college students — for twice-weekly sessions.

“We’ve learned a good deal about online education since March and it’s clear there is a need for more one-on-one support for students,” Supt. Austin Beutner said in a statement.

Philanthropist Jamie Halper, who co-founded the organization, is funding the pilot for under $1 million. “Remote learning is very hard on families and teachers, so this just seemed like a good and natural opportunity,” Halper said.

But given the projected need, it could take up to two years to expand Step Up’s pilot program districtwide, co-founder Nati Rodriguez said.

LAUSD also plans to provide one-on-one tutoring mainly outdoors at campuses, provided by teachers who will be compensated at their hourly rate for sessions that last 50 minutes and are designed to take place outside normal school hours. All participants must first have a negative coronavirus test. An agreement was approved last week by the teachers union and district.

“We want students at every school who need support to be able to have support,” said Alison Yoshimoto-Towery, LAUSD’s chief academic officer.

Kevin Claxton of Mar Vista has been tutoring for 20 years, and he’s never been busier, clocking 35 hours a week on top of his regular job as a basketball coach. He’s finding that he’s no longer supplementing students’ learning, but instead teaching multiple subjects and trying to keep his mostly elementary school students interested in their work.

“Now it’s more holistic,” said Claxton, who is also facilitating some backyard learning pods through Tutor Me LA and charges $60 to $90 an hour. Almost every child Claxton tutors is behind in at least one subject.

A Harvard study from 2016 found that one-on-one tutoring was especially effective in uplifting the achievement of low-performing students when compared with other efforts to improve education, such as reducing class size and expanding preschool. With this in mind, educators are advocating for the widespread availability of one-on-one tutoring.

Slavin believes that states and districts should contract with local agencies to hire “an army of tutors to work individually or in small groups with struggling students, especially in elementary reading and mathematics.”

“Frankly, this is no longer optional,” he wrote in a blog post.

Throughout the country, such projects are already in the works. In June, Maryland announced it would use $100 million in federal relief funds to provide tutoring statewide to students who need it the most. Legislation proposed by Massachusetts and Maryland senators would dramatically expand AmeriCorps to equip students with tutors and provide jobs to recent college graduates.

Start-ups similar to Step Up and volunteer groups are rushing in to fill the vacuum of tutoring opportunities for low-income students. One of those is Pandemic Professors, formed in April by UC Berkeley graduate Harley Simpson. More than 200 students — most in the Bay Area — have applied for the nonprofit’s tutoring services, which are provided almost entirely by college students or recent graduates.

UCLA recently established the Bruin Tutor Network, a free service made up of more than 500 student volunteers who work online at least one hour a week with K-12 pupils in foster care across L.A. County. The network also provides resources to foster parents and caregivers who want to get better at supporting their children while they adjust to e-learning.

The Los Angeles Public Library grants K-12 students online tutoring services through Tutor.com, powered by the Princeton Review. In June, there were 3,400 live tutoring sessions through the program compared with 1,900 during the same month last year.

“It’s been surprising to us how many people don’t know about the service despite our efforts to promote it, but this year of course families are hungry for exactly this kind of assistance,” said Eva Mitnick, director of the library system’s Engagement and Learning Division.

“We ask every family when they come in, ‘What do they need?’ So many of them say tutoring for their kids,” said Cecilia Trujillo, outreach coordinator at El Nido.

Trujillo said many parents voice concerns about their child’s grades rapidly dropping. Often cited issues are not being able to log on because of poor internet connection, or not having a quiet, distraction-free space to learn.

“I had one parent cry, ‘They’re going to penalize my child,’” Trujillo said. Another student had to go into a closet for his tutoring sessions to insulate himself from the noise in his home.

Carter, the UC Berkeley dean, said the weekly social-emotional support that tutors can provide could be even more important than any academic gains reaped from one-on-one instruction.

“There is a lot of angst about gaps and loss. But in my personal opinion, now is not the moment to be reveling in that kind of language,” Carter said. “Now is the time to think about what is the most fundamental and basic support we can provide for kids to sustain some kind of health and well-being.”

Silverman, the high school student, starts every tutoring session by asking Malachi how he’s doing; they usually chat for a few minutes before diving into the academics.

Arlene Reed, Malachi’s aunt, says the sixth-grader looks forward to his time with Silverman every week.

“His tutor makes him feel like he’s important,” Reed said, “that he can do it if he just keeps working on it.”